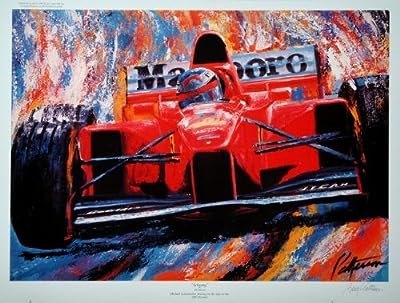 Price: $74.95
Buy Now from Amazon
Product Information (more info)
CERTAIN CONTENT THAT APPEARS ON THIS SITE COMES FROM AMAZON SERVICES LLC. THIS CONTENT IS PROVIDED 'AS IS' AND IS SUBJECT TO CHANGE OR REMOVAL AT ANY TIME.

"Schumy" by artist Bill Patterson. Driver: Michael Schumacher. Dimensions: 19" x 25". This print is taken from an edition of 495 by noted racing artist Bill Patterson. The scene depicts Michael Schumacher driving in the rain in the 1997 Ferrari. The 1997 Formula One season turned out to be quite competitive. Schumacher won in Monaco, France, Canada, Belgium and Japan, and he went into the final race in Jerez with a one-point advantage over Williams driver Jacques Villeneuve. Once again, the season finished in controversy, after an accident between the two. Villeneuve raced on to to take the crown, while Michael had his 2nd place in the championship stripped from him by the FIA. The composition of the artwork in this print is unique and the color quality is very vivid. This print makes a wonderful gift for Schumacher fans as well as Ferrari enthusiasts!