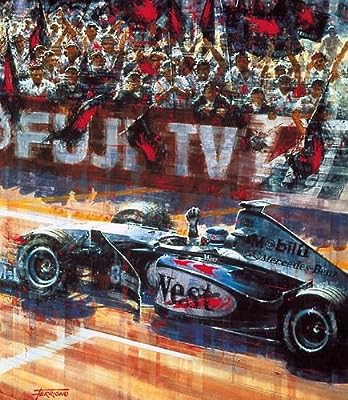 Price: $269.95
As of 2020-09-30 04:43:08 UTC (more info)
Product prices and availability are accurate as of 2020-09-30 04:43:08 UTC and are subject to change. Any price and availability information displayed on http://www.amazon.com/ at the time of purchase will apply to the purchase of this product.
Buy Now from Amazon
Product Information (more info)
CERTAIN CONTENT THAT APPEARS ON THIS SITE COMES FROM AMAZON SERVICES LLC. THIS CONTENT IS PROVIDED 'AS IS' AND IS SUBJECT TO CHANGE OR REMOVAL AT ANY TIME.

Artist: Juan Carlos Ferrigno Dimensions: 21" x 24" A classic Formula One racing print taken from an original painting by Juan Carlos Ferrigno. The scene depicts Mika Hakkinen as he wins the Formula 1 World Championship in the Japanese Grand Prix at Suzuka on January 1, 1998 driving a McLaren Mercedes MP4/13. The edition was limited to 500 signed and numbered prints, and have been personally autographed by team owner Ron Dennis.